The USS Republic (NCC-81371) is a Luna-class starship, and the sixth Federation vessel to bear the name. The Luna-class model was first commissioned with the launching of the USS Titan (NCC-80102), and while ships of the class are normally named for moons in the Sol system, the Republic was special in that she was the first Luna-class ship constructed following the Remnant Attacks of stardate 58851 in which the former Galaxy-class USS Republic (NCC-76241) played no small role in resolving.

The Luna-class Republic is a 17-deck long-range light exploration cruiser containing a large compliment of laboratories and research facilities that host some of the Federation's most advanced scientific sensory equipment available. It's substantial cargo capacity allows it to operate far beyond the range of most exploration vessels, and while limited in its capacity to accommodate civilians, onboard amenities permit crew to host family members during extended missions away from port. As part of the Federation president's initiative to diversify the crew of a select number of Starfleet vessels, Republic has been outfitted with the capacity to billet a small number of non-humanoid aquatic crew. Approximately 15% of the ship is configured with water tunnels and underwater workstations, as well as hosting a half-dozen Class-O cetacean suites, each capable of providing an oceanic living space and work environment for crew with delphinoid or mysticetid heritage and their ilk.

In a first for exploration-class vessels, the ship designers took a lesson from the plight of the USS Voyager (NCC-74656), and have equipped Republic with a class four industrial (CFI) replicator: a holodeck-sized matter-replication system that vertically spans two decks, and is capable of producing large, intricate constructs such as vehicles and small buildings as well as engineering spares and high-volume consumable supplies in bulk. This sophisticated fabrication facility requires large amounts of power to operate at full capacity, necessitating its location on the engineering deck just above the warp core's main EPS power junction, and directly adjacent to both the shuttle deck and the cargo transporter complex for expedited transfer and offloading of replicated material. The CFI replicator has been incorporated into Republic to serve not only for contingency colony resupply and disaster relief missions, but also as a vital survival tool should the ship ever be stranded in remote areas of the galaxy where communications and supply lines back to Federation space are non-existent. Given enough time and allocated power, the CFI replicator makes it possible for Republic to establish a small self-sufficient colony with modern Federation facilities, complete with space-based infrastructure such as satellites and warp-capable shuttlecraft.

The ship has three detachable sections: The mission pod, the saucer section, and the engineering section. While separation of any one of these sections would only occur during extreme emergencies, the mission pod is a mission-specific module that is replaceable at any standard Starfleet drydock, and can be detached with minimal effects to overall ship operations, affecting only long-range sensors and partially inhibit ship-to-ship weaponry. In contrast, separating the saucer from the engineering section should only be done for the most catastrophic circumstances, as the two operate best while conjoined together, and reintegration is a time-consuming process that requires a complex maintenance operation. This drawback in re-mating the two sections was deemed an acceptable trade-off for a robust, expedited separation mechanism, which allows the two sections to detach with such speed and force that they can reach a distance of over 100 kilometers apart in less than 10 seconds after given the command to separate. The contingency was considered a life-saving backup in the event of an inoperable warp-core ejection system during an overload event or impending core breach. Should this contingency ever be used, the saucer section is fully capable of shielded atmospheric re-entry with controlled soft-landing on any planetary body as long as impulse engineering and associated power systems remain intact. 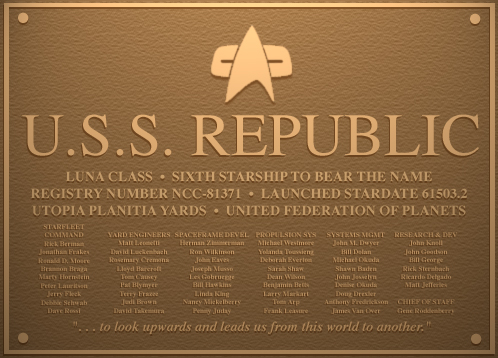